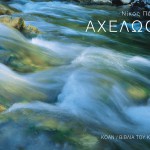 Acheloos is the second longest river flowing within Greece, spanning 220 kilometres from its sources among the mountaintops of the southern Pindos range to its mouth in the Ionian Sea, where it creates the huge complex of the Mesolongi wetlands. From the deepest antiquity to almost the present day the river has been the main thread connecting the lives of the people surrounding it, and it is associated with ancient myths, folk legends and countless historical incidents. Based on years of painstaking research, in the four chapters of the book the author follows the course of the river through some of the most remote and undisturbed areas of western Greece, describing in detail its physical characteristics and those of the surrounding areas but also presenting historical and cultural facts and addressing the major issue of the infamous proposal for the Acheloos Diversion.  Some of the accounts of European travelers are presented for the first time in Greek translation.

Foreword by the Ecumenical Patriarch Bartholomew.